skip to main | skip to sidebar

The hurricane, I mean. My hurricane, that is. There'll be other storms. Just ask the people on the Yucatan Peninsula this week. But my hurricane is over.

Coming out doesn't solve all your problems.

You're thinking, "duh, Chris!" But it's taken me 18 months and some recent rocky times in my relationship to figure that out.

It's hard to shake a lifetime of fighting your nature and building closets for yourself. I'm not like some of the (once) married gay men I've known in that I wasn't out to my wife during our marriage. I learned how to hide from her--and myself--pretty effectively. Once out, I thought the compulsion to hide would naturally dissipate. And it did for awhile.

But it turns out I have some issues--and closets--that might not have anything to do with being gay. Imagine that! Some of the things that I thought would resolve themselves because I am now openly gay actually got worse before I was able to recognize them as issues that need to be addressed. The good news is that I am now working on my issues and I'm learning a lot about myself and addressing things that I have been actively avoiding. And I'm blessed to have a man in my life who is standing with me through this because he loves all of me--the good, the bad and the ugly.

Last summer, our marriage at an end, I told KK that I didn't need anyone. I was trying to tell her that I was emotionally independent and capable of taking care of myself and moving on. She told me that she thought what I said was sad. It's only very recently that I have been able to see that she was right. We all need to be loved, and we all need to give love. It's part of what makes us human. I have always battled the thought that I have to be "good" in order to be loved. I'm not sure where that comes from. It might be the dynamics in my family; it might be the way I internalized Mormon and Christian teaching and theology; it might be my psychology; it might be all of the above and more. KK has shown me that unconditional love over the years we have known each other, and has continued to show it even after marriage. Jed now shows it to me every day. I'm finally ready to not only admit that I need it, but to accept it and offer it to myself as well. I hope this will make me a better person, partner, friend, father, brother, son, confidant, and former spouse. I aspire to be loving and honest in all of these roles in my life.

I'm taking a break from blogging and interneting for awhile. HURRICANE has been dying a slow death anyway, so this break might finally be the end of it. Or maybe not. But I'm going to go take care of myself for awhile, re-commit to my wonderful partner (even though we don't call each other that!), prepare for a wonderful summer with my children, and do what I can to nurture, repair and improve the relationships that have brought so many good things into my life.
Posted by Chris at 5/07/2007 01:37:00 PM 5 comments:

Out of the mouths of babes...

Driving through the Lincoln Tunnel to New Jersey from Manhattan on a bus, my four-year-old daughter, who had been gazing out the window, turned to me and, wide-eyed, exclaimed: "Daddy, I think this bus is going as fast as the government will allow!"
Posted by Chris at 4/09/2007 02:26:00 PM 3 comments:

In his important new book Covering, Yale Law School professor Kenji Yoshino uses the prism of his experience as a gay Asian American and his training as a legal scholar to examine the subtle ways that women and ethnic, religuous and sexual minorities are often forced to compromise their civil rights, their identity and their dignity in order to blend into the mainstream.

At first glance, covering appears less insidious than other societal demands made of minorities. In the past many have been forced to try to convert. Others respond to such demands by quietly passing. Covering is more subtle, as it often involves simply trying to "tone down" undesirable or stigmatized identities.

In my own evolution as a gay man, I have been through each of the stages Yoshino describes in his book. I sought to convert myself away from homosexuality, going so far as to convert to a religion that held the promise that I didn't have to be gay if I didn't want to be. When I failed in my efforts to convert, I continued to pass. I was married, fathered two children, and actively engaged in activities and a lifestyle that was easily identifiable as heterosexual. When passing became too much of a burden, I was still content to cover. I came out to my wife and a small circle of family members, but I chose not to engage in any way in a lifestyle that was identifiable as gay.

My covering stage was the shortest in its duration. Once I was finally able to accept that I was gay and that it wasn't wrong for me to be gay, I quickly decided that I had no desire to cover my identity. In fact, for a period I was uncomfortable letting stand the assumption that I was straight. I came out in ways that were probably unnecessary. But I would rather have people know I was gay unnecessarily than let them assume that I was straight.

The demand that I cover, however, remains a constant, particularly in circles where acceptance of homosexuality is tenuous. A few months ago I was involved in a discussion on an LDS blog called By Common Consent. It was a discussion of Carol Lynn Pearson's No More Goodbyes, and when I wondered aloud (as it were) what I should do to build bridges of reconciliation with my former faith community, one of the discussion participants told me rather pointedly that I should "get over" myself and recognize that my sexuality was just a "small part" of who I am. Why, he wondered, couldn't I ever talk about anything else on LDS blogs besides homosexuality?

The unfairness of his charge was apparent to me (and others), as I know that my interests are wide ranging. But more than being personally unfair, he was doing what if often demanded of gay people--asking that I cover my sexuality. It's okay for me to be gay, but, please, stop talking about it! As I have become more comfortable being out, I have seen this dynamic play out over and over again. "Straight acting" homosexual men are somehow more acceptable than obviously or more flamboyantly gay men. We see the demand to cover in a very pointed way in the LDS Church and other conservative religious traditions. LDS authorities have taken a page from the Catholic playbook in declaring that to feel homosexual attraction is not sinful, but acting on it of course is. In other words, it's okay to be gay as long one doesn't ever actually do any of the things that define one as gay--namely, have an intimate relationship with someone of the same sex. The covering demand of homosexuals in Mormon culture is further played out when homosexual Mormons themselves respond to the covering demand by downplaying the significance of their orientation, dismissing it as an annoying fact that in no way defines them or how they will live their lives. Just because they are gay doesn't mean that can't live their lives just as any other Mormon might, hoping for marriage and family or quietly soldiering on in celibacy, depending on the circumstances.

This is not unique to the LDS experience, of course. Such demands that gays "keep it to themselves" are commonplace in other religious tradtions, in the workplace, and on the athletic field (see John Amaechi). Quiet, apparently asexual homosexuals are far less threatening to the status quo and the moral order than those who live openly. And there are reverse covering demands imposed by the gay community as well--we passionately ask all homosexuals to come out, to live life as openly and defiantly as they can, and to reject any suggestion that to do so is in anyway problematic. Alas, life is not so simple.

As much as I want to be finished covering, I still do it. I hate it, but it happens. Maybe I don't mention Jed in certain situations when I easily could, or I withdraw from conversations about family and marriage because I don't want to have to explain my own personal transformation and circumstances. These things don't happen often anymore, but they happen. Sometimes I'm responding to an external demand that I cover, but other times I'm still fighting my own internal battles. But I firmly believe that recognizing the demand to cover is an important final step in coming out.
Posted by Chris at 4/06/2007 09:52:00 PM 9 comments:

Benediction, Part I: Integration and Reconciliation

HURRICANE is winding down. This blog was an invaluable part of my coming out process. But its moment is passing as I find myself on ever more solid ground as a out gay man. It occupies a space in the blogosphere that corresponds with a space where I no longer live: gay, married and Mormon.

But before I go, I am going to write a series of posts on themes that are important to me at this stage of life: integrating and reconciling the past, covering, and belonging.

I have written on this blog about integration in the way that many gay people talk about it after coming out. Bringing my identity and my sexuality into alignment lifted a dark fog from my mind. Integration is an essential part of the coming out process. But that's not the integration I have in mind now. Over the past few weeks I have intensified a different type of integration process. This one involves reconciling my current self to my past self. Part of that has been forgiving, myself and others, and essential to forgiving is recognizing and celebrating the good things about my old life. With my immediate family, that is easy. My love for my children knows no bounds. My friendship with KK remains strong and an important part of my life, and I value the good things that came as a result of our marriage. Other relationships, such as those with parents and old friends, are also worth holding on to and strenthening, and I am striving to do that. I have struggled more with forgiving other presences from my past. In particular, I have felt anger and bitterness toward the LDS Church. But lately I've found myself forgiving there as well, and remembering the good things that came from my Mormon experience.

HURRICANE is not my first blog. I had another one that I called Outer Boroughs in a nod to my place of residence at the time I was writing on it: Brooklyn. I used it to write about politics and culture and religion and the Mormon experience. After my faith fell apart, I took the blog down. But a few months ago I went back and read some of the posts. I still like many of them. They don't reflect my current reality or my current faith for the most part, but I think they reflect the kind of Mormon I was and they honor the good that Mormonism brought into my life.

So in this, the first part of my HURRICANE benediction, I share a handful of my blog posts from Outer Boroughs that I think capture who I was then, and who I hope in many respects I still am now: 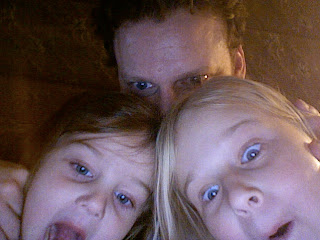